Gov. Steve Sisolak says the state of the state is "resilient and getting stronger every day."

During an off-year State of the State speech, he pointed out that Nevada's economy is growing at one of the fastest rates in the country. Nevada added 94,000 jobs in 2021 which is the highest percentage in the country. During Wednesday's speech, he mentioned that more than 100 startup companies launched in Reno during the past two years and that tourism and hotel revenue is back.

The governor gave his address at Allegiant Stadium in Las Vegas.

"This stadium is an example of just that," Sisolak, D-Nevada said. "It’s created thousands of new jobs from construction to transportation, from small business suppliers to technical staff, from the tax dollars it generates, to the hotel rooms it fills."

Sisolak announced the creation of the Nevada Small Business Accelerator Program to help startup companies to expand and encourage new technologies. He is also creating a bipartisan task force to reduce red tape for occupational licensing.

"Here in Nevada, we license everyone from barbers to private investigators and the system needs to change," Sisolak said.

The state has approximately $1.9 billion to use from the American Rescue Plan. The governor laid out his priorities for the funding, including the "Home Means Nevada" initiative. It provides $500 million for affordable housing developments, preservation of affordable housing, an increase in home ownership opportunities and land acquisition for future affordable developments.

The governor's office says this is the largest single investment in housing in state history.

"The plan boosts housing construction and homeownership opportunities," Sisolak said. "It will help seniors retrofit their homes, to lower their costs, improve their property, and stay where they want to be."

Sisolak says inflation is a national problem that is affecting people here at home. Wages are increasing but so are costs.

"Nevada families are getting squeezed at the pump and at the grocery store," Sisolak said."Childcare, housing, and healthcare costs are eating too much of a family’s income. It’s hard to keep ahead of bills and save for things like college or retirement."

The governor also announced an investment of $160 million to help lower childcare costs and to keep childcare workers on the job.

"This investment will double the number of families we support because I believe every family from West Wendover to North Las Vegas should have access to great childcare," Sisolak said.

He says Nevada will join the Northwest Prescription Drug Consortium, along with Oregon and Washington. He says joining the group will allow the states to negotiate prescription drug prices together, hold drug companies accountable and lower costs.

Another priority is on the education front, including teacher recruitment. His plan is to provide stipends and tuition assistance to nearly 4,000 future educators. Nevada will also use some of its federal dollars for school districts to provide meals to their students.

"We all know that you can’t learn on an empty stomach, so I’m announcing that we're investing federal dollars to ensure that our schools can provide free lunch for all students across the state for the next school year," Sisolak said.

The governor is directing his Workforce Development Committee to look for ways to make community college or apprenticeship and training programs free by 2025.

Congress recently passed an infrastructure law that will provide additional funding to the states. Nevada will use $4 billion to upgrade roads, bridges and water systems - $8 million will go towards wildfire prevention. The state will invest an additional $500 million for new broadband infrastructure throughout the state, while $12 million will go towards cybersecurity upgrades and $40 million to expand electric vehicle charging stations, along with new improvements to public transportation and airport infrastructure.

"These investments, overwhelmingly supported by Democrats, Republicans and Independents, will create thousands of new union jobs, the building blocks of an even stronger economy," Sisolak said.

Climate change is another focus for the governor. He wants half of Nevada's energy to come from clean sources by 2030 and have net-zero greenhouse gasses by 2050. Sisolak says he will get his Cabinet, scientists and climate leaders to create a strategy to deal with extreme heat.

"We will continue leading the fight against climate change and creating good jobs in the process because a resilient, clean energy economy is a part of a strong, diversified economy," Sisolak said.

The governor pointed out that Nevada State Police Officers have not had a significant pay raise since 2006. He is proposing a salary increase to the state legislature ahead of the 2023 Legislative Session.

"I have always supported increases in funding for our police to make sure they have the resources and training to protect and respect the communities they serve," Sisolak said.

Sen. James Settelmeyer, R-Minden gave the Republican response to the governor's speech. The minority leader focused a lot of his rebuttal on the fallout of the pandemic.

"Our families are facing escalating inflation and skyrocketing increases in the cost of living with no end in site and our children have navigated the unthinkable as their schools shut down overnight," Settelmeyer said.

Nevada received $4.42 billion in American Rescue Plan funding. Some of it went to local governments but $3.6 billion is allocated to the state. The governor's agenda includes the remaining $1.9 billion. Settelmeyer criticized the governor's use of the federal pandemic relief funds.

"Spending money is not leadership," Settelmeyer said. "Leadership is about making our government more efficient and effective for the people. This money will be spent to grow the government's size but with no thought of how to fund that growth when the money is gone." 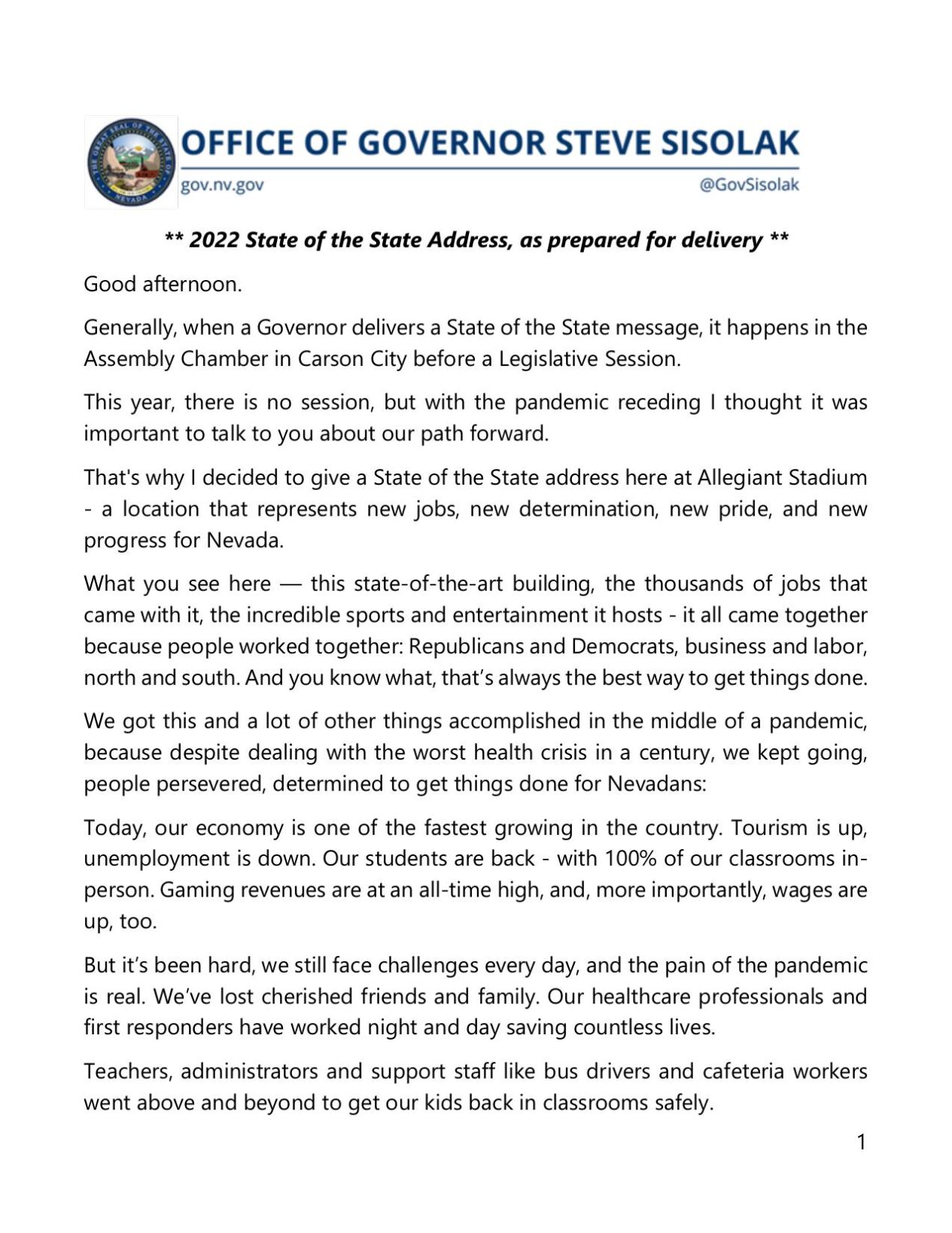 “It’s with pride and gratitude that we support Governor Sisolak in bringing millions of dollars in federal investment to Nevada. Democrats have worked tirelessly to ensure that the working people of our state receive the relief they deserve and the support they need. As our state recovers from the devastation of the Covid-19 pandemic, these funds won’t only help us rebuild Nevada but will lay the foundation for a stronger, more resilient, and more prosperous future.

“Time and time again, Nevadans have responded to uncertainty with determination and to hardship with hope. Thanks to the resilience of our communities, the leadership of Governor Sisolak, and the advocacy of our elected Democrats, our beautiful state is once again welcoming visitors from across the country and around the world. In this critical moment, we cannot afford to slip backward. While Republicans are planning to raise taxes on millions of Americans, Democrats continue to fight for the safety and wellbeing of our nation’s working people. We call on all Nevadans to stand with our governor as we work towards completing Nevada’s recovery.” 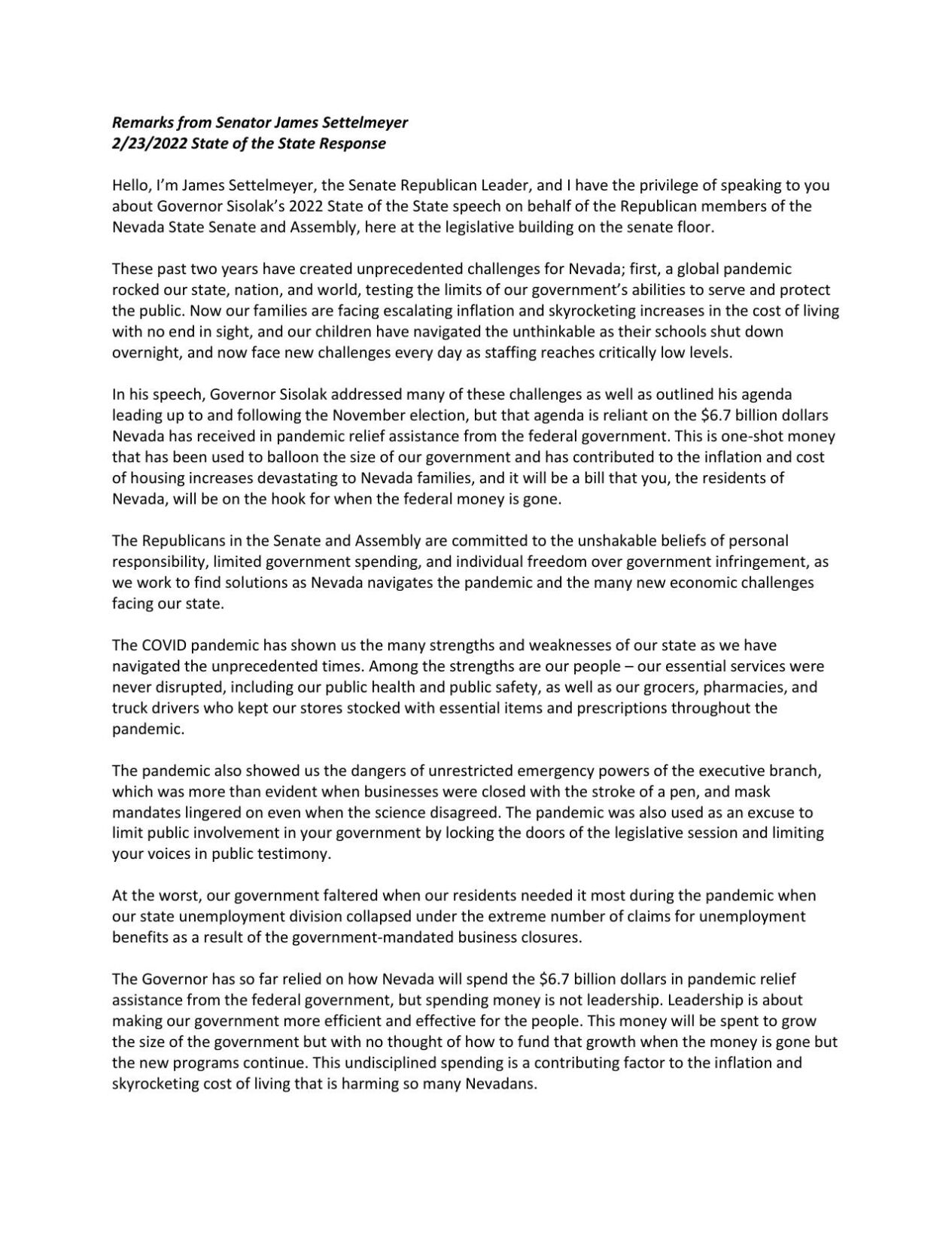 “During today’s address, Governor Sisolak stated a need for salary increases for Nevada's state police. If the Governor is serious about this critical need, a first step would be voting to approve and fund the category I peace officers Collective Bargaining Agreement (CBA) at his March 8 Board of Examiners meeting. The CBA improves pay, working conditions and training for state police. This small step should be just the beginning, as the pay disparity between state and local police is upwards of 50 percent, which has caused record-high turnover and vacancy rates for state police.

Supporting the police would be a 180-degree change for Gov. Sisolak, as his administration fought the Nevada Police Union at every level of the CBA negotiation process. Adding insult to injury, the state increased the state police Public Employees' Retirement System and health insurance cost, reduced uniform allowance, and mandated salary cuts and furlough days. It’s because of this and more, that the state police are drastically understaffed and Nevadans underserved.

We hope Gov. Sisolak will deliver on what he stated today by adequately funding state police and directing his administration to start bargaining in good faith in an effort to improve working conditions for their public-safety workers.”